Time, The Valuator is back with a vengeance, and a brand new music video ready to knock people right off of their feet. The natural growth and progression of the band can be seen in their third video: they brought us progressive vibes with Elusive Reasons, melodic vibes with When I Meet Death, and now expect a punch of energy, courtesy of The Violent Sound, premiering via Metal Injection.

It’s hard to pinpoint exactly what influences the band infuses in their music, but they’re, without a doubt, working incredibly well for them: with vocals like Hands Like Houses and instrumentation that at times reminds of a more rock-friendly TesseracT or DispersE, everything seems to flow and blend perfectly. And let’s not forget that vocalist Phil showcases some interesting and definitely surprising rapping skills that, as expected, compliment the rest of the track incredibly well.

The band’s vocalist also opened up and shared his opinion on the track: “

We live in a time in which money is everything. It’s worth separating families, manipulating the working class, creating fake enemies and even killing. People go to war for ideologies not of their own, but of their cowardly leaders. Made up reasons are what people are told to fight for.
Recent developments in our world have motivated me to write this song, because music helped me survive up to this point and my love for it continues to do so. Although it is a critical song, it symbolizes an outlet for all the frustration of what’s going on.”

Once again the band has teamed up with Pavel Trebukhin at Tre Films (Alazka, Novelists, Stick To Your Guns) for the music video, and with  Embark Audio for mixing and mastering.

More about the band: “Create an impression, let your light shine or leave traces“, with this vision,
the German lineup Time, The Valuator was founded mid-2015.
With vast influences from a wide array of different styles, they craft a sound of their own, blending atmospheric, catchy and heavy elements together, while taking absolutely no creative compromises.
With a lot of potential and very disciplined working, Time, The Valuator strive to create something to remember. 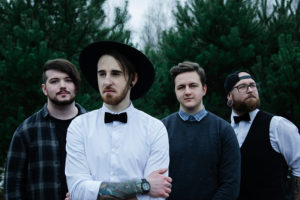