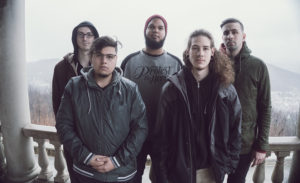 Stargazer are back after nearly four years, and as demonstrated by their singles, Temple of Solace, The Dream Electric, and Skinwalker, they sound bigger than ever. Now the time has come for the official release of their much anticipated full length album, Tui La. The premiere is brought to you by Lambgoat.

Blending melody, technicality, vicious vocals and an aggressive drive to keep pushing boundaries, the band has also found the perfect way to integrate their album concept in all of the tracks: Tui La is about balance and opposites, about moon and ocean, push and pull, life and death, and that is exactly what we find within the full length. Stargazer wanted to create a story, and succeeded in doing just so, the three singles released so far alone prove it. From “Temple of Solace” to “Skinwalker” and “The Dream Electric”, the quintet is firing on all cylinders, and you’re bound to not be disappoint

Matt Copp (vocals) has this to say about the album’s official release: “Tui La is the culmination of the last four years of our lives, our sweat, and our tears. All of us have gone through beautiful and terrible times along the way, and this album is a reflection and a celebration of those experiences. It may not fit the standard model of album writing or what’s current and trendy in the musical scene, but it was never our intention to do so. What we’ve made is something that is purely Stargazer; it’s exactly what we want to hear and feel and is a true representation of our individual and collective selves.”

More about the band:

Stargazer has begun to infect the east coast with their brand of out-of-the-box, free-thinking metal, winning over fans from multiple facets of the metal scene and uniting them under the banner of brotherhood and camaraderie. With a handful of tours under their belt, they have only become hungrier and more driven to see the sweet fruits of their labor, to travel and behold the diverse beauty of the world we live in, to increase their musical skill and sphere of influence, and to connect with every person they meet on a genuine, meaningful level. The five members of Stargazer have a need to learn and to grow, and in their travels hope to further their own human experience as they continuously blossom into their future selves.
As the years have passed, so too have the members and influences of the band, until finally arriving at the current apex of dedication, motivation, and discipline in regards to their craft as musicians, entrepreneurs, and best friends. No longer concerned with trendiness or “fitting in” adrift a vast musical sea of copycats and lookalikes, they strive to communicate a message of beginning to accept one’s self for who one is, and reflect that mantra in their music. Unapologetically nerdy and a little out of left field, each member injects his own unique musical inspiration into every song, resulting in music with solid foundation that can live and breathe all on its own.
Forged in the steel city of Bethlehem, Pennsylvania, the progressive metal outfit known as Stargazer has been trying to push the boundaries of music and of self for half a decade. Through the central themes of self-actualization, introspection, and personal growth, the 5-piece band aims to paint a diverse lanscape of musical emotion, from quick and aggressive melodic lines and odd time signatures to slow and lumbering grooves laced with haunting vocal drones and harmonies. Lyrical topics on the effects of different states of mental health, creation and destruction, and a fascination with the exploration of the human psyche add a not-so-standard twist to the progressive genre and provide an avenue for band and fans to connect more wholly within the complete musical package.