California-based duo DFB are back with a brand new video

Maintaining the momentum from their Perspective EP full stream release via Idobi Radio’s website, California-based duo DFB are back with a brand new music video. The premiere is brought to you byGear Gods.

Transcendence is heavy, melodic, and shares a conceptual message regarding inner spiritual struggle. Fans of Periphery, Killswitch Engage and Meshuggah will find plenty to love in this track. The music video truly lets the duo’s musical abilities shine, and features the one and only Aaron Stechauner (Rings of Saturn) on drums.

Vocalist Elijah elaborated on his vision, “For this video we wanted to convey a sense of isolation, a feeling of being trapped in a kind of purgatory. It’s relevant to the scene in the concept of the album, and is reminiscent to how I think a lot of us are feeling with the way current events are”. He also shared his feelings about having Aaron Stechauner on drums, “We were so glad to have Aaron with us for this shoot. He’s been a friend of the band for years and it’s been awesome to watch his progress with Rings of Saturn. A spot on the billboard charts is damn impressive for a death metal band, especially one as polarizing as Rings”.

More about the Band,

Formed in 2011, Dylan Furr started his journey as a solo artist, recording and mixing two instrumental albums under his name, showing the world his signature songwriting style and blistering solo skills. Constantly looking to further develop his sound, he added his own vocals to the mix on his third full-length record Juxtaposition, then later re-recorded the album with his new versatile vocalist, Elijah Arnold, adding an entirely new level of singing to the mix. Bringing on new members to the band, the name was changed to DFB, and they are taking the metal world by storm, preparing to release yet another EP, Perspective, later this year. 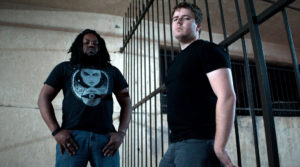