The Harbingers of Pestilence are here

Three years of hard work are finally coming to fruition for Metal quintet Dethrone the Sovereign, as the group is proud to release their latest effort and debut full length: Harbingers of Pestilence.

Finally the fans -both die hard and newcomers- have something to sink their teeth in: a jazzy, progressive, abrasive, heavy and bouncy album that is quite impressive, and just as captivating. Once you’ll press play, there won’t be a way out, be it the vibrating bass, the guttural vocals, the clean guitars, the haunting keys or the pummeling drums, listeners all over will be drawn into this new, refreshing sound that Dethrone the Sovereign has achieved.

Here’s what the band had to say about the album: “We are thrilled to finally present to you the culmination of our last three years of work, our debut full length album entitled “Harbingers of Pestilence“. Our goal with this album was to push ourselves both creatively and technically, as well as deliver fans something that stood out as a unique and memorable musical experience. We would like to thank every single fan and every last person who has ever supported what we do over the years, and it’s because of you that we will continue to push ourselves forward. We hope you enjoy the record!”.

– Driven by sharp riffs that contrast with crystalline segments of moving classical guitar and beautiful, sprawling segments of symphonic excellence, Dethrone the Sovereign take deathcore and give it a drastic overhaul, including progression and punishment in equal amounts to create an intense listening experience – 9/10, New Transcendence

– Title track “Harbingers of Pestilence” opens with a quintessentially ‘djent’ rhythm before staccato symphonic stabs and aggressive arpeggios overwhelm the track in an excellently epic way. – 7/10, It Djents

– Dethrone the Sovereign display a nice cross-section of various death subgenres.  We get the technical, djent-heavy riffs, the synth touchesand the progressive song structures rolled into one With so much talent on display, it is impossible to attribute the power of this album to any single member- 9/10, Metal Trenches

– Whether you like complex prog metal, theatrical symphonic metal, or gritty death metal, Harbingers of Pestilence offers it all – 7.9/10, Music Existence 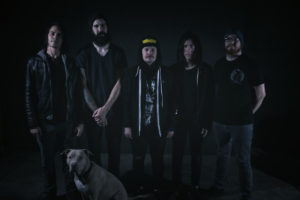