It’s a brand new day, and a brand new beginning for Metalcore quintet Speaking With Ghosts, based out of Chicago, as the group just announced their signing to indie label Famined Records. Furthermore, the band is ready to celebrate the accomplishment with even bigger news: a full length – Illuminated – coming November 17th, along with a brand new single to showcase what exactly they’ve been working for in the past few years. You can stream the music video now, courtesy of Bring The Noise.

It is today, that Speaking With Ghosts unveils “Woven In Gold”, the first track off of their newest album set to see light this Winter. Kicking the door in with a force, vocalist Ryan belts out the main theme of the track: “are we sealed by faith?”, and then proceeds to scream his heart out for the following three and a half minutes, while being backed up by crispy guitar tones, nice melodic riffing, groovy bass and pummelling drums. If you’re looking for something that’ll get your blood flowing, your foot tapping, and your head banging, rest assured, you just found it.
Along with the track the band has also launched bundles for the album and, if digitally pre-ordered, fans will also be able to grab “Woven In Gold” right away.

Pat (bass, vocals) also had some thoughts to share about the lead single: “Woven in gold touched a universal topic by asking “are we sealed by fate?” In the song, we wrote it about questioning our choices and why we’re making them. If we are here, existing, what is it for? If we’re not happy, what must we do to be happy? If we’re in control of our lives, why haven’t we found the answers to our questions yet? It’s all about the unknown and the thought processes behind why we do the things we do what we do them for”.

More about the Band,

Speaking With Ghosts is a 5-piece Metalcore band based out of Chicago, Illinois. The band consists of Ryan Wilmot, Craig Hoffman, Tyler Baskin, Pat Olson, and Jake Stone.

Starting in December of 2013, the band set off to make an impact on the local scene and worked tirelessly to play shows and put out music. In June of 2014, the band traveled up to Michigan to record their debut EP, Searching For Direction. Upon their return, they shot a music video for a single off the EP, Enemy.

Since then, they’ve continued to play shows and make an impact on the local music scene, culminating in a chance to play Knotfest 2015 in San Bernardino, California, and have worked all throughout 2016 to write an album worthy of being their first full length release.

In 2017, the band has worked hard to tour in order to spread influence nationwide and create new friends along the way. Their work ethic shows no signs of stopping, and 2017 will see the release of the band’s first full length album, Illuminated, released under Famined Records.

The band takes their influences from other bands such as The Ghost Inside, Kingdom of Giants, Fit For A King, Parkway Drive, The Color Morale, and August Burns Red. The band strives to maintain an exciting, crowd inclusive show that is both enjoyable to listen to and entertaining to watch. 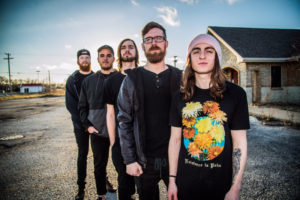